This multi-downlink feature allows a Network Server to send multiple downlink opportunities at once, e.g. one item for RX1 and one for RX2. The gateway will send at most one downlink item from the list. The ChirpStack Gateway Bridge will respond with a list of ACK items, indicating which item item was emitted, which item(s) failed and which item(s) were ignored (because the previous item was
emitted).

The ChirpStack Concentratord provides a unified API to different types of gateways which makes it possible to implement channel re-configuration for this backend.

This release provides IPK packages that can be installed on a Kerlink iStation gateway.

Use the testing channel instead of stable:

Use the chirpstack/chirpstack-gateway-bridge:3.9.0-test.1 image and tag (will be available shortly).

Could you clarify which packet forwarders support having their meta-data forwarded in this fashion?

This makes it possible to forward data provided / collected by Concentratord. E.g. in case of the SX1302 it is possible to read the temperature of the chip, but it also allows to forward the configuration version, board model, … In the end, this is merged with the meta-data from the ChirpStack Gateway Bridge, so that the NS receives a single meta-data field with all the key / values.

Gotcha. We have a situation where it would be nice to tack some metadata onto a Semtech UDP uplink or stats payload, but had not thought it was possible (at least without hacking both ends of the conversation).

Example from my local test environment, the Concentratord part is still to be released: 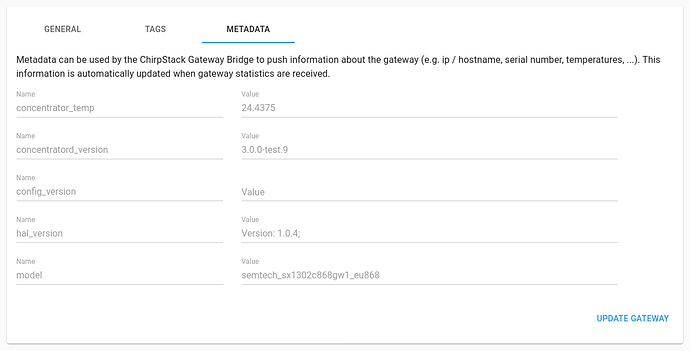