Device stops being recognized after a while

Hello, the trouble that I’m running against is the following:
I have an EM-300 from milesight with 1.0.2V and OTAA (both in the app server and configuration of the device), it joins, sends data and it gets registered as a device in the application I created for it, and then a couple of hours later the application stops recognizing it’s packets, the gateway window sees the data, but the application and device don’t. It does it until the sensor sends a join again every once and a while and the cycle repeats. 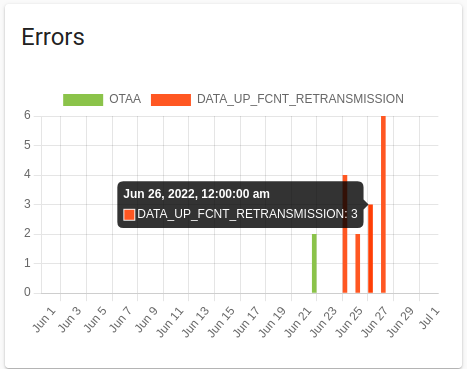 The errors that I get are from frame count, I disabled the frame check on the configuration tab but it doesn’t solve the issue.
Other thing that I saw it that on the journalctl output of the network server when the device sends a data frame, and its not being recognized by the application it outputs an: “get device-session error: object does not exist”
I just wanted for somebody to point me in a direction for debugging, if I should try with the configuration of the device profile, the device itself or maybe other thing that I’m not seing.
Thanks!

The error from the network server may indicate that somehow, the session of the device was not found. Either your device somehow changed its device address or perhaps Chirpstack somehow lost the session in Redis.

From what i’m seing is the case of the device changing address after joining, thanks!, I will check in the device configuration to see if it’s posible to resolve