Hello,
I’ve opened a new topic because I seem to have a bigger problem when creating the devices.
→ referring to my other question
(Periodic downlink - encodeDownlink() - device joinrequest after ~14 Days - #5 by Christian)

I’ve gRPCed most of my devices through BloomRPC so far. That all worked very well for swoeit. Because of the problem with the downlink from the other topic, I noticed that the devices probably have a problem in some way.

We are running Chripstack V4, the applications have an influxDB integration.
The devices are imported with the BloomRPC program

All devices join properly and pass their data on to the influxDB integration.

Now to the problem, the link and device metrics remain empty.
No device status request is sent either, although it is set.

Yesterday I started several attempts to delete devices and add them again, this time by hand. Chirpstack “recognizes” the device with all its old data (events, LoRaWAN frames).
But nothing has changed, no device status downlink, no metrics.

I have a couple of new temperature sensors here that I’ve been experimenting with.
Import with gRPC:

I did the same for a second device

I don’t know what to do anymore, does anyone have an idea?
Are there any log files to look at? 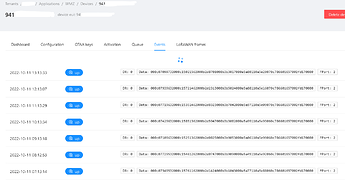 Did you check the logs?

could you tell me which logs are interesting?
I’m more in the frontend, can also check something in the background. everything else is up to the IT department

I checked the logs with a colleague.
We don’t understand the last message, our region is actually enabled.
For the others, we don’t yet know how to eliminate them.