I’m trying to do things by small steps here kkk.
I was able to install the docker / docker-compose (the old Windows machine was having a problem, I had to do an Ubuntu environment)
I made the git clone only from Concentradord https://github.com/brocaar/chirpstack-concentratord.git.
I accessed the created folder and executed:

These files were generated as described in:

however I don’t know what to do with these files.
I can’t find a type of installed or something to perform the installation on the rasp 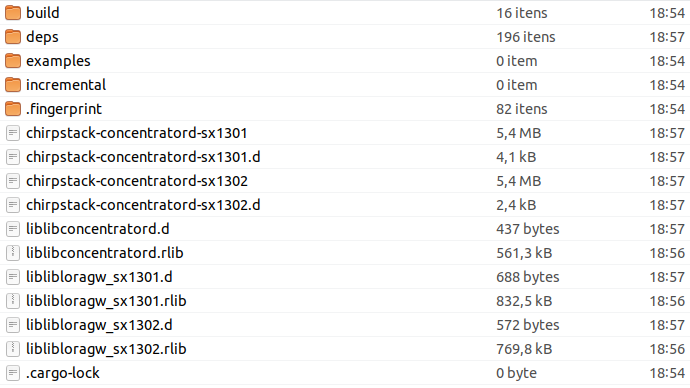 What are you trying to achieve?
What concentrator chip are you planning to work with?
I think that a good way to start getting your hands-on is in taking a look at how chirpstack-concentrator is installed in chirpstack-gateway-os, specifically checking what’s inside do_install() method at:

In there you can find what’s the process after compiling package.

If you are using a gateway model that it’s supported by chirsptack-concentratord such kerlink-ifemtocell or multitech-conduit, then, would be awesome to check:

Concentrator HAL daemon for LoRa gateways. Contribute to brocaar/chirpstack-concentratord development by creating an account on GitHub.

I just wanted to test it on raspbian.
I’m setting up a gateway (rasp0-Wifi + rhf0m301 +bme280(i2c)+ ublox neo 6m + 4g modem)
I need to use the raspberry0-wifi for its energy consumption, I’m using a solar plate and lithium batteries for power.
I tried to use the Os-gateway, but some components are missing that I need (ex: Python-pip).
I am now compiling the gateway-OS with some modifications, but I would like to learn how to install concentratord in distributions outside gateway-OS

I am now compiling the gateway-OS with some modifications, but I would like to learn how to install concentratord in distributions outside gateway-OS

Hi Alfredo,
Did you ever get this working? I too am looking at Concentratord with modifications and run outside of gateway-OS.

Hi, I tested only a few modifications within the gatewayOS. I was unable to install the concentratord in another distro