We are trying to migrate away from the Docker Compose Redis instance. We’re still on Loraserver (the latest version before the name change to Chirpstack). We migrated the keys with this procedure: How To Migrate Redis Data to a DigitalOcean Managed Database | DigitalOcean. However it seems like we didn’t update the configuration correctly for the application server. So only the network server was pointing to the new instance. We didn’t discover this error before someone pointed out that our devices that are supposed to report data every minute, only reported data 4 times or so during an hour instead.

After fixing the configuration for the application server too, the data rate still hasn’t increased. So now we’re wondering if that wasn’t the problem in the first place, or if the time that went by where the application server and the network server were pointing at different Redis instances has messed something up. I couldn’t find out if there’s something in the documentation that says anything about how Redis specifically is used by both the application and network servers. Maybe I’ll have to dig through the source code? 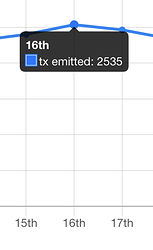 When adding a new device that reports every minute, it does so flawlessly. Any suggestions on what we can do to get the data rate back up without physically resetting all of our devices?

You haven’t given many details to work with. What is the latency/round trip time of your managed Redis compared to your previous local version? Maybe some benchmarking is in order, as the managed Redis is likely fairly opaque in its resources/performance allocated.

I was just wondering if it is possible at all that the added latency could be the cause. We’ve reverted back to the Docker Compose Redis, and now the data rate is back up again.

Certainly a possibility. It could also be rate limiting on the part of your managed Redis provider.