Problem with sending downlink via MQTT

I have loraserver up an running (GW bridge, loraserver and lora appserver on one physical host). I can see Uplink and downlink in appserver GUI - all looks working fine.

I need to send downlink manually via mosquitto_pub command.
I found several threads already on similar topics, but I think my issue is simpler, I’m missing something.

I am publishing as:

and then listening on:

I’m watching the journalctl in paralel for Bridge, loraserver and lora app server, but all I see is the normal messages sent by the node uplink/downlink.

mosquitto client seems to work fine also, as I can subscribe for the gateway topics and I can see the packets arriving from the node.

I would appreciate if anyone can point at the problem, I can send the logs is necessary.

thanks in advance,
Sergi

Gents, no one? I would appreciate some hints

Are you subscribing prior to publishing? Your message says “and then”, which implies you publish and then connect to subscribe.

Thanks bconway,
No, actually I am subscribing first and then trying publishing…

I’m sorry i am limited to send you an unique picture but i would like to explain my problem as best possible. You can click and zoom the picture.

Thanks for you help

When i try with the following file : 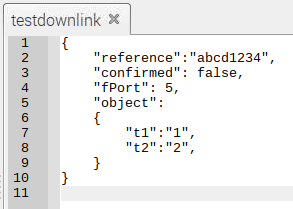 I get the frame in the Live Device Data Topic but it’s an error.

I get the error : “value must be an array”

There is the same error indicated in the lora-app-server logs.

My JSON File seems OK so is there any bug in parsing Json Data into lora-app-server application ?

Thank’s for your help !

I tried your json example but i always receive no data on my RN2483.
All my settings for RX1 and RX2 seems to be good.
I receive an ack packet on the live device data view from my RN2483 :

I don’t have experience with single-channel gateways, but I know many people run into issues with these kind of gateways. Why not buy one of the available SX1301 based Raspberry Pi shields? That might save yourself some trouble

Thanks for the example brocaar. My gateway is not with me at the moment, will try that soon

Then publishing on same level. contents of mqtt file is same as in your previous post. Do not see any warnings while publishing. But I don’t get anything in subscription (separate terminal window)

Short update on my initial topic, I did a clean install of all Lora modules from scratch and now it is working fine.

I am publishing a json file (mentioned in this thread earlier, thx for the example btw) to application topic. content of the file are:

Looks there was something brokeნ during my config tuning.
thanks all for your responses.

Hi everyone
I am trying to send downlinks to a class C node. Are there other fields needed in the json file to do this?
Thanks

No, you are “just” scheduling a downlink. It is up to LoRa Server to decide if Class-A / B or C is used for the actual transmission.

Hello,
I am sending the downlink to my node using

I see the downlink data in Lora-App-Server under Applications / AppName / Devices / DeviceName / Lorawan Frames. But I don’t see the same under Device Data. Should it not be there? since the data is sent to that node? And also under Lorawan Frames - the data under "frmPayload: 1 item bytes: “dj2swnNZE1wHJXIhIYHRhteg5SPi” - this data looks different than what was transmitted, should it not be same as in the json file? I am confused, can someone please help me…

Can anyone help me out please?
Thanks

Did you try it? Does it works?

I followed this instruction and it worked for me. The only difference for me was that my MQTT broker was running in the gateway and my mosquitto_pub command was given from my laptop. So, I ran the following command and it worked for me. In my case it was turning a motor ON/OFF which was connected to a lorawan end device. The command I ran is:
mosquitto_pub -h 192.168.0.105 -t “application/1/device/0101010101010101/tx” -f /tmp/test.json

EDIT: FIXED. Absolutely unbelievable! The ENTIRE problem was caused by copying the example JSON text from the web page, which has double-quotes that LOOK like “real” double-quotes (ASCII 0x22), but are in fact 0x9c. You would think that using pre-formatted text in MarkUp means “Use the text I typed”, not “Replace some characters with something that looks the same but is not”.

Running into this same problem here. Chirpstack is running in a container on port 11883. I subscribe to the MQTT server, and the device sends a message, and we see the message.

So following the above, to send data to the device, I should do:

And we see this:

But I never see the data get queued or sent. If I send the same string to the same port via the web UI, it works fine. So what am I doing wrong when I use mosquitto_pub? I have tried putting the JSON string in a file and using the -f option, but that made no difference.

Also, where does the 1 in the application/1/device/e00227005046162e/tx string come from? I presume it’s the applicationID we see in the received string, based on a sample of one.