Processing gateway error time out for waiting for connection

running chirpstack after a whole night, i found all the uplink data was lost from yesterday night (the webUI show the gateway last seem at yesterday night); i check my network and it is available.
my devices are trigger with schedule uplink, it seems like just suddenly disconnected.

i restart gateway but cannot connect to chirpstack, i try restart chirpstack docker and finally it connected.
could anyone tell me what happened?

edit:
i got the same error again, here are the error logs start

@brocaar could you help or guide me to trace the error?

This looks like a Redis connection issue. Have you checked your Redis logs?

here are the redis logs when the error occured

I seem to have encountered the same issue. Running chirpstack v4 using a slightly modified docker compose (but no changes to the redis section), overnight it looks like chirpstack lost connection to… something - perhaps redis? Everything was proceeding as normal, and then all of a sudden we start to see timeout errors. No other logs show anything strange at that time.

I think redis logs around that time look normal

I was able to connect to redis while this issue was happening, and it didn’t look like there was anything going on that would have caused the timeout. I see that there are 100 open redis connections that are made between chirpstack and redis, but this doesn’t seem to be bumping up against any limits as far as I can tell.

i try to use redis locally(not in chirpstack docker, on my local machine), the problem still occuried.
i don’t have any idea to deal with.

my test env:
I have two gateways, two devices, connect to a chirpstack instance, but the two devices send at high frequency (about 5s once), after a night I can see about 228 devaddrs in redis. 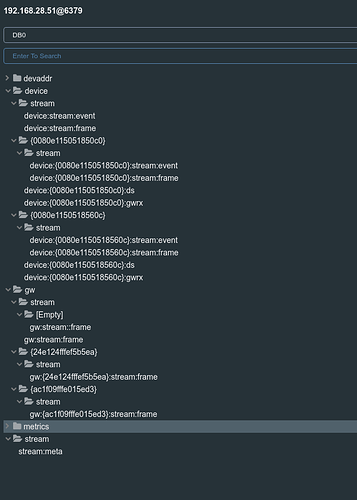 @brocaar Maybe you have some more insights into how redis is being used. In debugging I checked my client list when everything was blocked and saw every connection looked like this (all the connections have xread as their last command):

I then issued a CLIENT KILL TYPE normal to kill all the connection and chirpstack did reconnect and all my new connections look like the following, and the interface is once again working:

@zeara One question for you: when you’ve found this issue, have you had your browser open on one of the either gateway or device “frames” pages? I just realized that I’ve been sitting on those pages polling - I wonder if over time something is happening internally and those connections aren’t getting killed properly and just end up blocking.

yes, i open the loraframe’s or event’s page even for a whole night; sometimes i forget to close sometimes i uss it to monit data uplink

@zeara I’m going to try leaving mine closed and see whether I end up with the full client list again and the timeouts.

@brocaar This continues to happen to us. Our current configuration has nginx as a reverse proxy in front of Chirpstack using grpc_pass for the API calls. When watching the frames page for one of our gateways, I would hit a minute with no traffic coming through the gateway, or no payloads from a device (if we were on that page), and nginx would close the connection due to a timeout.

My suspicion is in these cases, nginx never receives a response from the grpc call (because it’s waiting on traffic from the gateway, which isn’t returning in the 60s default) and then is closing the connection to the client saying that it’s closed. But perhaps Chirpstack is not closing the connection once nginx does, and so it’s just keeping that connection to redis open, waiting for frames to come in to send upstream (which is now gone).

Is there a way to ask a running Chirpstack instance how many grpc calls it’s currently serving? Or alternately, figuring out a way for Chirpstack to let go of these redis connections once the proxying connection goes away?

Thanks for all the feedback. Based on the above info, I will try to reproduce this issue at my side again. Given that all the connections are using the xread as their command looks like this is related to the streaming logs and events.

I have found the issue and will issue a bugfix release soon. Thanks for all the input