We’re currently looking for new gateways, and we’ve had our eyes on two (The Things) gateways:

The new TTIG would not be workable as it’s hard coded to point to TTN servers, which also happen to speak a new protocol (actually it has to go through translation servers as they haven’t yet implemented their new protocol).

Essentially you could use the hardware only by recreating your own firmware from scratch. If you were going to do that you could probably make it natively speak MQTT avoiding the need for the gateway bridge. Or you could port the Semtech code and speak the legacy UDP protocol to a copy of the gateway bridge running elsewhere.

Thanks for the fast response, @cstratton. What about the TTOG? On the TTN forum, they are saying that TTOG should be compatible with LoRa server, and that it should work.

Do you have a LoRa Gateway Bridge for TTOG?

Thanks for the fast response, @cstratton. What about the TTOG? On the TTN forum, they are saying that TTOG should be compatible with LoRa server, and that it should work.

I’d expect you could point it at a gateway bridge running on your server fairly easily.

As for running the gateway bridge on the gateway, it has an RK3188 tablet processor (seemingly with 1 gig or ram and an 8g mtd device that is probably NAND) apparently running Ubuntu. I don’t know if the pi executable would work (Although still an ARM it’s likely a slightly distinct binary and library situation at OS level) I suspect not, but it does work on some armbian platforms. I’ve switched to a custom solution for that role and so never pursued trying to build the gateway bridge from source but I suspect you should be able to do so on the TTOG if you study the process used to build it on or for other gateways. Perhaps someone else has already done it. (To be clear, while it runs Ubuntu you can’t use a binary .deb intended for a PC running Ubuntu, a pre-built would have to be built for its particular ARM variant of ubuntu or debian)

Looks like these aren’t fully on the market yet but may have to consider evaluating one vs. custom assemblies when they become so.

I have successfully tested the TTIG gateway with LoRa Server, it uses the Semtech BasicStation packet-forwarder (which is supported by the LoRa Gateway Bridge). Note that you need to re-configure the gateway to forward to your LoRa Gateway Bridge instance instead of TTN. This can be done remotely using the BasicStation CUPS protocol, but there is no official process to do so.

The TTOG I have not (yet) tested, but when it has an ARM processor, then you should be able to run one of the provided armv5, v6 or v6 binaries on it.

How do i reconfigure the TTIG? I dont wanna use the TTIG with the TTN and i bought this one because its official specified as: “Can connect to any network backend of choice”, so i thought, it were easy to configure any other Backend.

On which way can i configure the packet forwarder to connect to my own loraserver?
How do i get the TTIG in the mode, were it is able to do this? Connect to PC over USB or over Wi-Fi?

its official specified as: “Can connect to any network backend of choice”

I don’t know what the official way of re-configuration is. I think it is best to ask the vendor selling you this gateway

Hi, I have one TTOG. If you access by http to gateway, in config pág you only need to change Ttn server address for you server address. 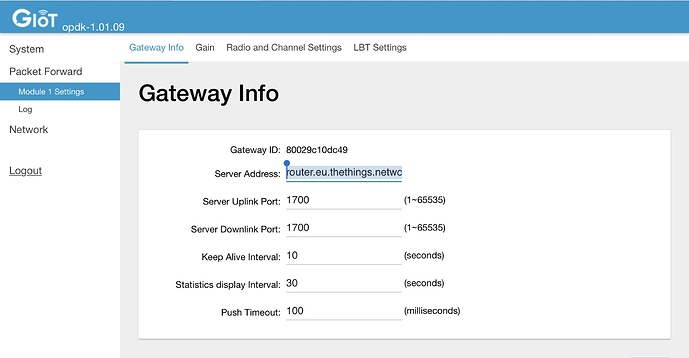 Please, can you say me how? Thanks in advance!

I have already answered this question, see my previous comments.