I set up the ChirpStack application server on my RAK DevKit v2 (Pi4 + RAK2287).
My current project needs to build a sniffer using the GW as I can’t have access to the keys or to the LoRaWAN network, also I’m not interested in the content of the payload coming from the sensors.

I am currently able to receive packets by subscribing to the MQTT topic: gateway/(gateway ID)/event/up.
I want to work on the packets received by using Node-RED. In particular, I’m interested in saving the device address and the GPS coordinates of the GW as my project includes a moving GW.

So my questions are: how frequently are the GPS coordinates updated? (Is it the standard 1Hz update or less?)

Where do I find the GPS coordinates inside this frame? I was already able to decode some info on the device address and maybe the altitude but I’m not figuring out the rest of the data. Is there an explanation of the whole packet somewhere? (I tried by looking into brocaar’s Github but I’m not familiar with the Go language) 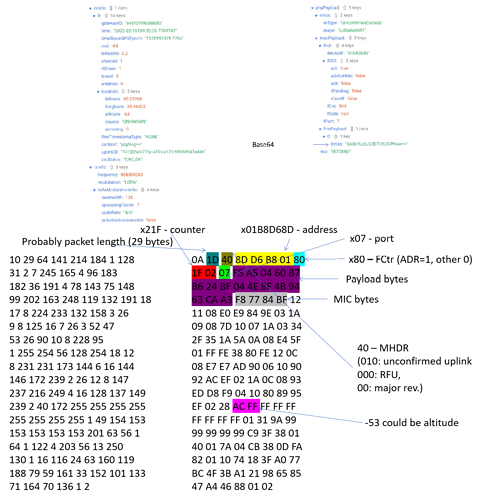 Any help would be greatly appreciated thank you.

For understanding the LoRaWAN packet format, the LoRaWAN specification would be the best source

Hello, thank you for your reply.
I understand that the information on the location is presented in rxInfo, but could you be more specific about where do I get this information in the packet I extracted from the MQTT topic gateway/(gateway ID)/event/up?
I’m not really interested in the content of the LoRaWAN packet but the main thing for me is to get the data about the location of the GW every time the packet is received. Is this information contained in the quoted hex packet? For example, could you help me understand what’s after the MIC bytes that I have highlighted in the image?
Thanks for your help.

First you need to be clear about the distinction between information which the gateway receives from the node, which is passed on unprocessed and unparsed, vs information that the gateway adds itself, that ends up as part for the uplink report.

It sounds like you’re trying to reverse engineer the protobuf encoded uplink report the hard way by studying the raw data of its encoded form (and blurring the distinction between the received packet and the gateway added information), rather than by running it through a protobuf decoder routine informed by knowledge of what’s supposed to be there.

However, the Semtech Packet forwarder code does not wastefully put the gateway’s location information in every signal report, rather it is only sent in the gateway status messages (and only if it’s actually able to be determined).

So to have gateway location information for uplink signal reports, you’ll have to decode and parse both receive reports and status reports and retain the location information by gateway, so that when you get a signal report your own code can add the most recently known location for that gateway. In theory you might want to expire your gateway location knowledge after some multiple of the usual gateway stats period.

Thank you for your help, I’m starting to understand now.

rather than by running it through a protobuf decoder routine informed by knowledge of what’s supposed to be there.

Could you be more specific on how to implement this? Maybe I could find the correct decoder in the Github of the Chirpstack platform?

And how about the status reports? Where can I get the information on how to decode them? I’m interested to get the gateway location at every packet received or with a frequency of 1 second and I’m not sure if I can make it work using the Chirpstack platform.

Gateways are really not supposed to move, having them do so would spoil the ADR algorithm (and no, you can’t really adapt to gateway movement, since you don’t have sufficiently frequent opportunities to communicate knowledge back to the node).

Packet forwarders only typically transmit gateway location information at the stats interval. Nevermind that more frequent information is likely useless for the reason above, if you wanted it you would have to modify the settings of the packet forwarder; you may find that reducing the stats interval that dramatically could cause conflicts that might need some design changes, or inventing a sort of “location only” kind of packet that shortcircuited from the GPS NMEA sentence straight to a report, without going through all the usual steps of gathering stats.

Thanks for the explanation, I will be recording the gateway position in another way, it looks to be the better solution. I still have to grasp how to decode the protobuf I presented in the original post, do you have any advice for this?
Thanks.